Some time in Fredericton…

I woke up nice and early and got the bike packed up and then headed for breakfast. The Quality Inn Pres du Lac has a fabulous hot breakfast with a great offering of continental breakfast items as well.

With a full belly, I mounted up and headed for Woodstock where a fellow rider, Kevin Sutherland, was joining me to head into Fredericton. Kevin is with the Blue Knights and he ensured that I got to our meeting point in Fredericton on time!

This was going to be an exciting day for me, I was going to meet up with a ton of riders in Fredericton to go to Oromocto/Gage Town and in the afternoon I was going to get to take part in the changing of the guard!

We pulled up to the Lord Beaverbrook Hotel and were greeted by such a site –30 bikers and Mayor Brad Woodside himself were there to meet me. 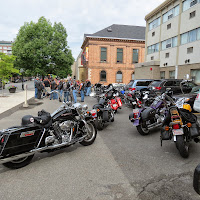 The Road Dawgs made me an honorary member of their riding club and I got to share hugs with Sue Lawrence of the Fredericton noise bylaw fight and my old friend Brian Stuart from Toys for Big Boys in Moncton.

After a few photos and a ton of hugs, we were off with Headley from the Fredericton Ride for Dad acting as road captain.

Our first stop of the day was in Oromocto/Gagetown where members of CAV and the mayor of Oromocto, Robert Powell, met us.
It was a powerful and moving time as I shared with over 40 riders as to why I was riding across Canada to raise funds and awareness for the causes of our veterans.  We shared tears and hugs and then went to Timmy’s for a coffee and to plan the rest of the day’s riding.

The gang that was able to stay with me for the afternoon took me on some wonderful windy roads away from the main highway.

It’s wonderful to ride with the locals in any region – they always know the best routes and places to eat!

We went to a funky little pub called the Old Boot Pub for a late lunch. We had a blast there and Gord of the CAV gifted me with the most amazing “House Wife” from the 505 Ladders.
A tiny little mending kit that he asked me to keep in the pocket of my vest.
It’s still there and will stay there!

The food was wonderful – the onion rings were ENORMOUS! The service was great and the company was impeccable – what more can you ask for?  Well – Brenda Moxon was able join us!  Brenda was integral to the fight against the motorcycle only noise bylaw in Fredericton and had just had surgery so she wasn’t on the ride with us. It was so good to finally meet her and get a hug!

After lunch a bunch of us headed back to Fredericton via some more twisty little roads. I was honored to inspect the guard at the Changing of the Guard ceremony at 4 pm. Jumper gave me his Paratroopers Beret to wear and ensured the it was creased properly and that the Paratroopers badge was placed just right!

It was to be a fitting end to an amazing day in support of our troops.

You see the Canadian Army was born in 1884 with the establishment of the Infantry School Corps, Company 'A' in Fredericton.  Their coat of arms bears the Beaver as a part of their tradition and connection to Lord Beaverbrook.

Lord Beaverbrook, Sir Max Aitken, who was an expatriate Canadian millionaire, employed artists, photographers, and cinematographers to record the war for future generations and in early 1916, Beaverbrook established the Canadian War Records Office using his own funds. The CWRO publicized Canadians' role and gathered and created records to document the war.

Lord Beaverbrook was the Chancellor of the University of New Brunswick from 1947 until 1964.  New Brunswick was his home as a child. He was raised in Newcastle NB although he was born in Maple Ontario.
In spite of living a good amount of time in Great Britain, he never ever forgot his roots and how much he loved New Brunswick. He ensured that Fredericton had a magnificent art gallery, town hall and skating rink among other things. 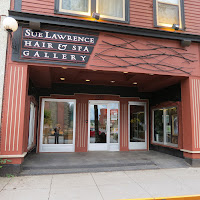 After the changing of the guard, I went to Sue Lawrence’s Hair Spa & Gallery.  Sue is a hairstylist and so much more. She is a champion of local art and provides local artisans with a place to display and sell their creations.
Located in the old Gaiety theatre, Sue took all of her creative talent to create a place that is warm, inviting, eclectic and fun.

The place is truly fun – there is no other word for it and like the lady who owns it, this place exudes a vibrant energy. I spent a good amount of time taking in the art; the woodwork and all of the interesting sculptures while listening to Sue explain who made this or who created that.

I could have spent a lot more time there than I was able to, that’s for sure.

After my tour of her store, Sue went home to get supper ready and I went over to the Lord Beaverbrook Crowne Plaza Hotel and got checked in.  Headley helped me get my bags to the room.  He and I had a coffee and gabbed for a bit while I waited for Sue Lawrence to call about dinner. 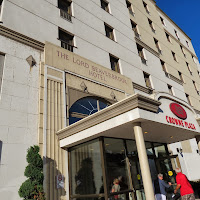 This hotel is amazing. Opulent but not stuffy, I felt so comfortable here. The staff was incredibly friendly and helpful and the room was to die for.  They had this wonderful relaxation kit on the bed filled with a spray, face cram and foot balms all meant to sooth and relax.  After my night at Zeeland (what Sue calls her place) I took full advantage of the kit and fell in love with the calming and soothing effects.

I finally got my call, it appeared that Brenda Moxon was going to be picking me up.

Headley and I said our goodbyes, he was off to a BBQ with friends elsewhere but would pick me up in the morning to ride out to Kings Landing with me.

Brenda and her hubby showed up with their son to take me out to Sue’s place.
We had a wonderful meal, shared some wine and conversation and made plans for the next morning to take in King’s Landing.

As many times as I have been to New Brunswick, I had never been to King’s Landing and I was excited, as I had heard so many wonderful stories about the place.

After a great night’s sleep and a hearty breakfast, I packed up my bike.  Headley arrived and
we headed off to King’s Landing, about 40 KM’s west of Fredericton, where we were to get a guided tour of this historical village.

From the minute we walked in to the visitor’s centre I knew I was in for a special time.
The place is utterly magnificent.  The furniture, the exhibits and the people were totally captivating. 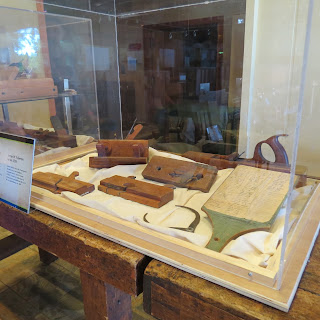 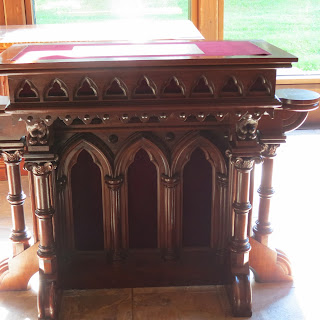 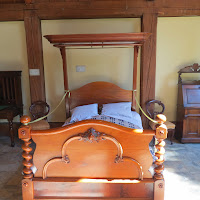 I was introduced to the man who would be my tour guide and was totally taken back to the 19th century.

Built in the late 1960’s, King’s Landing is a collection of buildings that have been moved from various parts of New Brunswick to facilitate the construction of a hydro-electric dam that raised the St. John River over 150 feet.

This place is immense and is filled with area homes that have been thoroughly researched and are a factual representation of the families who once lived in them.  The horse and cart that took us around past some of the buildings dropped us off up by the water mill and from there we walked all through the various homes and buildings that are part of the interactive displays.
Every home and trading area that is represented has been restored to a different time period.
You will see the changes in the clothing, the architecture, the utensils and the equipment as you move through this living museum.
Period dressed actors and actresses make this an interactive museum too.
They are hilarious and never go out of period/character!

I found it very interesting that many of the gardens you see throughout the place are heritage gardens filled with plants that are all but extinct. But are specific to the period represented by the farm house they were grown at.

I watched a dog-powered butter churn in action and a horse powered saw as well.
At the end of my tour, I met back up with Headley and headed to the parking lot.
I was pleasantly surprised to meet a crew of cadets and their commanding officer who agreed to have their photo taken with me.
Sue and her man Eric along with another couple were waiting for me and the trip to St. John.
We would be having a late lunch there, getting me checked in at my hotel and taking in the New Brunswick Museum!  It was going to be a busy afternoon and I couldn’t wait!

We rode under pleasant skies and perfect temperatures to Saint John, it’s a short ride up highway 7, only 113 KM’s and we were meeting a crew from the CAV and a few other riding clubs.

Until next week, ride safe! 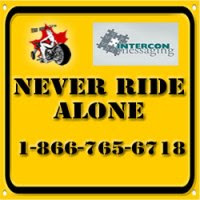 You NEVER have to ride alone! 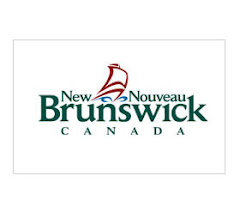